Uganda are runaway leaders at the halfway mark of the first leg of Group B of the ICC CWC Challenge League. The East African side handsomely defeated Bermuda by seven wickets with 59 balls to spare.

Sseynondo’s 4/35 was instrumental in restricting the islanders who were bowled out for 208 in 45.2 overs collapsing from the heights of 159/2 after 29 overs. Delray Rawlins’s dismissal triggered a collapse that saw eight wickets fall for 49 runs in the space of 16 overs. Just like had happened with Kenya, it was Shahzad Ukani, 86 off 116 balls, and Ronak Patel, an undefeated 75 off 95, that saw Uganda home.

No one who saw the opening 10 overs of the Jersey – Italy game would believe the eventual outcome of this match. The Azzurri were in total control with the channel men in all sorts of trouble at 15/2 against Berg and Di Giglio. However, the next 30 overs saw Jersey score 199/1, mainly through a 146 run 4th wicket partnership between Greenwood (102 off 111 balls) and Jenner (88 off 66). Jersey eventually closed their innings with the robust score of 280.

Italy’s bid realistically lasted 21 overs. At that point, with skipper Perera dismissed for 47 and the score 96/5, the game was all but over with Abdul Rehman’s patient 36 giving Italy a scent of respectability in reaching 158. 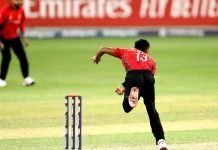