Cricket returned to Indianapolis World Sports Park last weekend, as the upstart Blind Cricket Midwest held their first “Have a Go Day” this past Saturday. “Our first meeting was on 15 May, and our first demo was 25 July. We’ve gone from a conversation to actually doing it in under two months, during a pandemic, with many people travelling from Columbus, Ohio,” committee member Taariq Smit told me proudly over the phone from Cape Town, South Africa. Sixteen athletes travelled to the site of the 2015 ICC Americas Twenty20 Division One tournament to give cricket a try. “What surprised me is that it wasn’t the expat community that came out, except for the three players who had played before. This is a group of people who haven’t played this.”

Blind cricketers are totally independent during play. There are no sighted guides that help the players determine where the ball is; the teams and players are on their own. The umpires don’t interfere or instruct; it’s up to the players and the coaches to help one another. The athletes bowl, bat, field, throw, catch and keep wicket. Aside from the bowlers delivering the ball underhanded and rolling it along the pitch, there are very few modifications. Blind Cricket is every bit as action packed as sighted cricket, and far less modified than Beep Ball, blind sport’s popular version of baseball.

Brittany Montgomery is the lead go getter and Coordinator of Blind Cricket Midwest’s five person committee. “She’s the driving force behind it, she’s the one that initiated the conversations,” said Smit. Brittany lives in Indiana with her husband Mujeeb Shami, a partially sighted veteran blind cricketer from Pakistan. It was Mujeeb’s love of the game that inspired Brittany to take the leap. Mujeeb’s experience and knowledge will surely help newcomers adapt to the unique techniques and fundamentals of cricket as he fulfills the role of Development Officer.

Hasan Khan hosts a blind sports podcast in the UK, and serves the Blind Cricket Midwest committee as the Technical Advisor. His skills will also be utilised on the club’s YouTube channel. Taariq Smit is the Social Media Administrator for Blind Cricket South Africa, and an international umpire. He serves as the International Consultant. “It’s an international committee. I’m 8,000 miles away, and Hassan is 4,000 miles away.” Rylie Robinson, a member of Ohio’s first blind soccer team, rounds out the group as the Public Relations Officer.

The group makes no secret of their ambition. “I think this is the start of something big in the states. I really feel if we can get some momentum going and a lot of hard work… there’s no reason why America can’t qualify for the World Cup as soon as 2023,” said Smit. Apparently, the blind cricket world agrees. “We’ve had coaches all over the world offer help. We’ve been very fortunate Pakistan Blind Cricket Council has donated bats, balls and stumps”

Elbows deep in the action is Katie Atkinson of Columbus, Ohio, the founder and head coach of Ohio’s first blind soccer team. “We’re planning more coaching sessions. (Katie) loved it. Because she’s involved with blind sports, and works in the Recreation and Parks Department in Columbus, she understands what someone needs to get something going,” said Smit.

For now, the group understands that this is just the beginning. In a discussion on Saturday with Hasan Khan of the board, Brittany Montgomery said “We need to make sure that the people who have learned about this take that back to their communities and keep spreading the word…we can’t just take a long break…we have to keep working at this and we can’t give up. We can’t get discouraged. This is going to take time.” Taariq Smit agrees, “The main thing now is to have 15 or 16 people committed. The response so far has been absolutely brilliant. It looks like we’re going to start teams in Columbus and Indianapolis (3 hours apart by car), and they’ll be able to play each other.” Potential grounds in Columbus have yet to be identified, but the Indianapolis World Sports Park will do for now. “If we can utilise that field regularly, hopefully we can give them incentive to maintain the fields better.”

You may wonder “how does an upstart blind cricket club plan to appeal to potential athletes in the midwest of the United States?” For some context, Blind Cricket is growing quickly across the globe, and in 2018 a Boston-based entrepreneur donated $1 million to the Samarthanam Trust for the Disabled for the benefit of blind cricket. That money has been utilised to help international and state teams travel abroad. The United States isn’t too far from the ground floor, as only 5 Blind Cricket World Cups have been conducted since 1998. Only two T20 Blind Cricket World Cups have been held, the first in 2012. Combining the unique attributes of a sport that can be enjoyed by partially sighted and legally blind participants requiring very few modifications (no “foul balls,” and no sighted “pitchers” required as with Beep Ball) with the alluring potential of international play makes for a promising sales pitch. Throw in the multicultural aspect, which young people in the United States are much more likely to embrace than ever before, and you’ve got the formula.

“I thought that it would be interesting to bring something a little less traditional to the US. Not many people know what cricket is… my idea was to not only bring it here as a game, but to create a whole cross-cultural aspect to it as well. If we can create a strong team and eventually be recognised by the World Blind Cricket Council, we could compete internationally, and that was very appealing to people,” says Montgomery. Taariq Smit defined some potential early regional possibilities. “The opportunity to represent your country is there… the West Indies is close… every Island in the West indies has a blind cricket team.”

And what about the potential to represent the United States in the Paralympics? Well, that’s where the thrill of possibility finds a speed bump. Unfortunately it is unusual for a sport to be recognised by the International Paralympic Committee unless it has an Olympic equivalent. There are only four sports in the summer Paralympic Games which are unique to the Paralympics. In fact there hasn’t been a summer sport without an Olympic equivalent blessed by the IPC since Wheelchair Rugby debuted as a demonstration sport in 1996 and became a medal sport in 2000. With the passion, camaraderie and determination on display from Blind Cricket Midwest and from the entire world community of Blind Cricket, it wouldn’t surprise me if Blind Cricket beat it’s sighted older sibling to the podium. 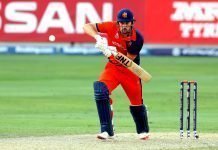 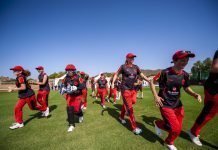