After yesterday’s news that United States head coach Pubudu Dassanayake will step down from his role effective immediately among a raft of other changes, it has now been announced that Iain Higgins will be USA Cricket’s new CEO.

Higgins comes to USA Cricket after more than 10 years of leadership roles with the International Cricket Council (ICC), serving as the Chief Operating Officer of the sport’s governing body since 2015. He has a deep working knowledge of cricket in the United States for a period of time, having been not only instrumental in the planning and establishment of USA Cricket but was also a key ICC figure in handling membership and governance matters including the expulsion of the country’s former governing body, USACA.

In a recruitment process that began almost six months ago, reportedly “hundreds of candidates were initially screened and nearly 50 of those were engaged in conversations, with Higgins being the clear front runner and ultimately approved unanimously by USA Cricket’s Board of Directors” the USA Cricket release stated.

“I am thrilled and privileged to be given this incredible opportunity at such an exciting and pivotal moment in the future of cricket in the U.S. I look forward to working in partnership with all of the many stakeholder groups and individuals across the country to collectively drive greater levels of engagement with the sport at all levels and across all communities.

The future for the sport in the U.S. is exceptionally bright, the scale of ambition is huge and the plans that USA Cricket has recently laid out have enormous scope and potential. I look forward to playing my part in developing and implementing those plans together with the rest of the cricket community so as to help the sport to achieve significant growth in popularity within the U.S. and so that USA Cricket’s role and status within the broader global cricketing landscape is enhanced”, Higgins said.

“In our quest to grow the sport of cricket in the United States and enhance the profile of USA Cricket within the sport’s global community, Iain rose to the top as the best candidate among a highly talented international field,” said Paraag Marathe, USA Cricket Board Chair. “The experience and connections Iain has developed over the last decade at the ICC made him uniquely qualified for this position and we look forward to adding his tremendous leadership skills to our effort.”

Higgins, a British former professional rugby league player and sports lawyer, will step down from the International Cricket Council in August to assume the post starting in early September 2019. In Indianapolis, an “International Committee” buoys Blind Cricket in the USA 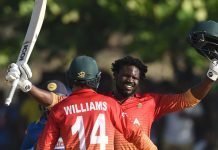