Well that’s that. England simply too good, as Heather Knight’s brilliant century propelled them to an insurmountable 176/2. In response, the Thai batters struggled hard but their lack of power hitting meant they couldn’t keep up with a stiff run rate.

Over 20.0 – Thailand 78/7. Chaiwai also plays a couple of big heaves through leg, but even at full power the shots only reach 3/4 to the rope. Story of Thailand’s batting really. Finally finishes the innings with a 4! Winds up and slaps it through square, using the pace rather than her own power.

Over 19.5 – Shrubsole gets another wicket! Kamchomphu slogs at this, and it goes high but not long. Winfield completes a simple catch on the ring at mid-on.

Over 19.0 – Thailand 70/6. Ecclestone back on, concedes a boundary! Chaiwai plays the finest of lap sweeps off middle and almost brings it back into her stumps. Runs away to the rope.

Over 17.3 – wicket, runout! Liengprasert knocks it to midwicket and hesitates just a fraction before committing. This gives Shrubsole the time to set herself and throw down the stumps. Can’t be ball-watching on those quick singles!

Over 17.0 – Thailand 61/5. Glenn finishes her quota with another tidy over as Liengprasert and Chaiwai run hard but can’t get it through the field.

Over 16.0 – Thailand 57/5. Shrubsole is back on, and claims another wicket! Tippoch charges, Shrubsole pushes it wide to off, Tippoch misses the cut shot and keeper Amy Jones does the rest with a good take and drags the ball back to complete the stumping. Not quite Sarah Taylor’s fluidity behind the stumps but gets the job done effectively.

Over 15.0 – Thailand 54/4. Glenn back on. England deploying the in-out field to great effect. Thailand looking very capable at rotating the strike, but chasing 177 that was never going to be enough.

Over 14.0 – Thailand 52/4. Suttiruang swings through the line but can’t clear the Winfield and it’s a simple catch at mid-on. Skipper Sornnarin Tippoch (LHB) next in.

Over 13.1 – wicket, bowled! Nat Sciver’s medium pace back on, and Koncharoenkrai plays an ugly swipe across the line. Ball was cross-seam and skids on just a tad, but she should really have hit that. Chanida Suttiruang (RHB) the new bat.

Over 12.2 – wicket! Ecclestone drifts one in, turns back a fraction and hits Chantam on the back pad. Stone dead LBW.

Over 12.0 – Thailand 48/1. Koncharoenkai into the action against new bowler Dani Wyatt as she strokes a lovely cover drive to the rope. Chantam then chops through third man and they collect a double.

Over 11.0 – Thailand 39/1. Ecclestone back on with left-arm orthodox and Brunt spills a chance! Chantam chipped it to a close midwicket who dived forward but couldn’t hold on. Tough chance.

Over 9.0 – Thailand 35/1. Glenn continues, batters, knocking it cross-bat into the deep at midwicket for singles. Thailand just lack the power to really go after this target.

Over 8.0 – Thailand 32/1. Heather Knight brings herself on with some sunglasses-wearing offspin. Keeps the line tight and Thailand push into the gaps.

Over 7.0 – Thailand 29/1. New bowler Sarah Glenn fires in her legspin and hustles through the over. Chantam kicking herself that she only gets one as she slogs a juicy full toss to the deep at midwicket.

Over 6.0 – Thailand 27/1. Brunt finds her line for the rest of the over and Chantam can’t pierce the extra defences.

Over 5.2 – boundary! Chantam takes advantage of a shorter one from Brunt to cut nicely through backward point. Forces a field change as slip comes out to reinforce the ring at point.

Over 5.0 – Thailand 23/1. Sophie Ecclestone into the attack with her offspin. Tight lines and the Thais can only turn over the strike.

Over 4.0 – Thailand 21/1. Another gorgeous cover drive for 4! Big stride forward, caresses the half-volley off Sciver and holds the pose for the photographers.

Over 3.0 – Thailand 17/1. Chantam into the action with a glorious boundary! Steps down the pitch and uses the pace of Shrubsole to sweetly time a drive through cover. Lovely shot.

Over 2.0 – Thailand 8/1. Katherine Brunt the new bowler and Thailand successfully work it into the gaps.

Over 1.0 – Thailand 5/1. Nannapat Koncharoenkrai the new, right hand batter just survives! Oohs and ahhs all round as she attempts to push it off the back foot and it chops down between her pads and the stumps. Keeper Jones watches it just kiss the stumps.

Over 0.4 – wicket! Shrubsole removes Boothachan with a classic swing-bowling LBW dismissal. Goes round the wicket, gets it curling away then cuts off the seam back into the back pad. Gorgeous delivery, no chance for the batter.

Players back on the field after the innings break. Anya Shrubsole to take the new ball with right arm seamers.

Tough ask for Thailand here as they need 177 after Heather Knight played a dominant hand of 108* (66). English warming up on the field already.

Over 20.0 – England 176/2. Brilliant end to the innings as Knight steps forward and nails a glorious slog sweep 6 high and long over a tumbling cow corner who crashes into the boundary hoardings.

Over 19.3 – Knight brings up her century! Suttiruang pushes it outside off and Knight punches through backward point and sprints back for the second! All smiles as she reaches the milestone, the fourth time at Women’s T20 World Cups.

Over 19.0 – England 164/2. Knight (97*) to within striking distance of a century as she collects 4 by dancing down the track and slicing it over extra cover. Over broken up by a baffling review as she was hit on the pad.

Over 18.0 – England 155/2. 17 off the over as Liengprasert is on to bowl and gets taken apart. First, a tough chance on the boundary is spilt, as a Knight slog-sweep gets top-edged but Chantam can’t hold on, then Knight steps forward and swings powerfully over mid-on for 6. Then she pulls out the reverse sweep to get Sciver on strike, who then slams it cross-bat for a straight 4.

Over 17.0 – England 138/2. Boochatham back on. Half-chance at fine leg as Knight slogs and top-edges but fielder can’t quite get there and it’s 4.

Over 16.0 – England 131/2. Knight concludes the most productive over of the innings with another 6! Gets underneath a juicy full toss from Chanida and guides a sweep shot over the rope at fine leg. 15 off the over.

Over 15.3 – 50 up for Sciver! Swipes across the line, top edge sweks to cow corner but lands between 3 fielders.

Over 15.2 – boundary! Chanida Suttiruang back on and Sciver unleashes straight as she pumps it over the bowler to the rope.

Over 15.0 – England 116/2. Lateh continues, Knight again sweeps to the rope. Shuffles slightly towards off and directs it fine of the fielder at 45. Then Sciver muscles the last ball with pure power forward of square for another 4.

Over 14.0 – England 106/2. Another misfield at point as Knight punches off the back foot and they run 2. Laomi disappointed.

Over 13.3 – boundary! Knight blends power and timing as she reaches forward and sweeps beautifully along the ground to bring up the 100 for England.

Over 13.0 – England 96/2. Heather Knight brings up her 50! First she reaches outside off and swings a slog sweep high and long for the first 6 of the game! Then knocks it back through midwicket for the milestone. Sciver 38* at the other end.

Over 12.3 – runout chance! Padunglerd back on, Knight punches to short cover and excellent fielding from Tippoch as she dives to stop the run then gets it back to the bowler in double-smart time. Not out.

Over 12.0 – England 87/2. Laomi more accurate this over, and doesn’t drop short, but Sciver (37*) and Knight (42*) good enough to work the singles. Bunting it straight then Sciver drives to the offside sweeper in the deep.

Over 11.0 – England 82/2. Tippoch unfurls a disconcerting roundarm variation, though the surprise factor doesn’t draw a wicket. Still sharp off her own bowling, but a glorious offside boundary to Knight who steps down and thumps it through extra cover.

Over 10.0 – England 74/2. Two boundaries this over, first a lap sweep as Knight gets clever, then Laomi punished through backward point as she doesn’t bowl to her field – drops too short and doesn’t have protection.

Over 9.0 – England 66/2. Tippoch back on, rotating her bowlers effectively. Lets the pressure off again last ball as Sciver slams it back straigh tand the diving fielder fumbles on the rope.

Over 8.0 – England 58/2. Suleeporn Laomi on with hustling legspin. Much better lines as the batters find the fielders. Knight 22*, Sciver 25*.

Over 6.4 – boundary! Chanida Suttiruang on with her right-arm wobblers. Strays a little down leg and Knight clips it nicely through square. End of the powerplay means two extra fielders in the deep, but the diving effort can’t keep it in from the rope.

Over 6.0 – England 45/2. Lateh back on with left-armers. Keeps her lines tight this time outside off as Thailand’s ring field pounces on everything… but again Thailand let the pressure off as she strays wider and Knight drives beautifully through square.

Over 5.0 – England 40/2. Tippoch on to bowl with her skiddy offspin. Knight treats herself to another boundary swept behind square as Sornarin strays a little full and a little legside.

Over 4.0 – boundary! Knight sweeps behind square as Padunglerd goes too full and straight. Thailand releasing the pressure at the end of the overs. England 33/2.

Over 3.4 – boundary! Ratanaporn Padunglerd on with more tight offspin. Knight bunts it back past mid-on, then Sciver works it behind third man with a late cut. Looking in fine form.

Over 3.0 – boundary! Boochatham finds the blockhole outside off, but on the last ball just gives Sciver enough space to puch off the back foot past cover. Class shot. England 23/2.

Over 2.1 – boundary! Boochatham pitches up a fraction too much and Sciver leans forward to caress a lovely cover drive to the rope. 17/2

Over 2.0 – 13/2. Soraya gets wayward to end the over as she darts one down leg for 5 massives wides, then slides it just outside the offside tramlines. Sciver 6*, Knight 0*

Over 1.3 – wicket! Wyatt goes slicing to extra cover and Liengprasert takes a good catch diving forward. Thailand’s fielding has been and continues to be their strength. Heather Knight the new woman in. 7/2.

Over 1.1 – boundary! New bowler Soraya Lateh starts her over of left-arm orthodox with a gift to Sciver, who dispatches a dolly of a full toss to the rope at square leg.

Over 1.0 – 1/1. Boochatam very tidy as she nags outside off. Only run comes as new bat Nat Sciver drags on across to midwicket.

Over 0.2 – wicket! Jones stumped! Charges down and Boochattam pushes one past her as she attempts to slash through the offside and Koncharoenkrai fumbles briefly but clings on and drags the ball into the stumps. Dream start for the Thais!

Over 0.0 Nattaya Boochatam taking the new ball here as Amy Jones faces up for England.

14:55 GMT: Thailand’s rather jaunty anthem blasting round the ground before the more sombre God Save the Queen rings out. Play underway in about 5 minutes.

Welcome all! Today we’re live from Manuka Oval as Thailand won the toss and opted to bowl. England openers Dani Wyatt and Amy Jones will make their way into the middle soon. 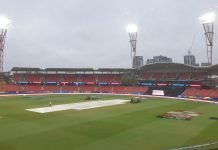