Only a few days after announcing the rescheduling of the 2020 Men’s T20 World Cup, The ICC has today announced the postponement of two further qualifying events scheduled in 2020 due to the ongoing COVID-19 pandemic.

In addition, the ICC U19 Cricket World Cup Regional Qualifier Division 2 in Africa has also been postponed. It was due to take place in Tanzania between 7 and 14 August with Botswana​, Kenya​, Mozambique​, Rwanda​, Sierra Leone and Tanzania all competing.

The ICC is still hopeful of rescheduling these matches. ICC Head of Events, Chris Tetley said: “We will now work with hosts and participating Members to find a window where cricket can be safely and practically rescheduled. With this week’s IBC Board decision to hold the ICC Men’s Cricket World Cup 2023 in October and November of 2023, we now have been given additional time to work to reschedule the Men’s Cricket World Cup League 2 postponed matches and enable us to preserve the integrity of the qualification process, allowing it to take place on the field of play.

”The remaining ICC U19 Cricket World Cup Regional Qualifier Division 2 event in Asia scheduled between 1 and 9 December due to be hosted in Thailand is being monitored and kept under review.

Click here for the ICC page for status of all 2020 ICC qualifying events. 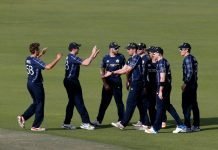 EC weekly roundup: mass cancellations, a wrap of Namibia’s domestic league, and a series in Singapore? EC weekly roundup: 35 all out and other stories