Tim Brooks reflects on recent happenings in the emerging cricket world in his column By Hook or by Brooks.

A few thoughts this time on status, perceptions and a look ahead to the 2020s. Since T20I status was extended to all countries many associate players and teams have entered the record books with eye catching statistics. But despite status being equal amongst all teams there has been a trend of selective editing in the mainstream press. Lists of highest scores, for instance, often only feature Full members with some small print awkwardly explaining the omissions. The presumption amongst editors, we can only assume, is that either their readers aren’t interested in so called lesser teams or the statistics are not comparable.

On the first point I think this is a significant misjudgement. In my experience cricket fans are interested in the game beyond the Full members and would love to see a Spanish batsman or Fijian bowler feature in such analysis. It is a talking point, and let’s face it cricket fans love nothing more than a talking point.

On the second point fans are intelligent enough to recognise the different contexts in different international fixtures. Please don’t patronise them by editing on their behalf. It goes to show that whatever the ICC do on status, and as I’ve written before it has an unhealthy obsession with it, the media and wider world may apply their own filters and perceptions. You have to feel for the players who have their incredible feats edited out in this process. Unfortunately they are victims of a narrow minded approach that has held cricket back from being a truly global game. As far as I’m aware the world hasn’t stopped revolving on its axis since the status was extended. So surely time to consider an extension for ODI status too.

As we enter the 2020s it is a mixed picture for Associates. Global tournaments remain unnecessarily restrictive denying the majority of teams the opportunity to grow their profile, player base and funding streams. Quite why the powers that be don’t see world cups as opportunities to grow the global game remains a conundrum. Funding remains a constraint too and many, many countries rely on the heroism of passionate volunteers to keep cricket going. The shadow of match fixing has unfortunately taken its toll too and we await anxiously news of the next scandal.

However, there are some encouraging signs. The new qualifying pathway tournaments are a step forward, though don’t forget those teams below the cut off line, there are more regular fixtures and the proliferation of franchise leagues make it easier for leading Associate players to make a career of the game. If they are paid that is! The women’s game has taken huge strides forward in recent years. Olympic recognition is urgently needed to release untapped funding and government support in emerging cricket nations. Countries like Germany and Sweden have seen player numbers soar in the last decade and new leagues have shown the potential of Europe as a cricket region. There needs to be a commitment by emerging nations to take an inclusive approach that reaches out to all their communities to seek a breakthrough into the mainstream sporting fabric.

Since the start of the new qualifying tournaments there have been signs of a fascinating recalibration of the traditional pecking order below test level. The USA is becoming a force to be reckoned with while traditional strongholds like Kenya continue to fall off the pace. In the forthcoming World Cup cycles you can foresee countries like Germany and Japan prospering if encouraging development is harnessed into consistent performance. There will, as ever, be many wondering whether the sport can make a genuine breakthrough in countries with huge potential like China and Malaysia. Perhaps the hundred will go international!

The ICC’s approach will be interesting to see too. At one time they were desperate to celebrate the 100 member milestone but now the direction of travel seems to be concentrate resource and development efforts on a much smaller group of 40 or so. This raises the prospect, sadly, of cricket fizzling out in some of the former Affiliates. The sport itself will grapple with governance (many of Woolf’s recommendations have been acted upon, but the fundamental flaws he identified remain), the fight between short term greed (that generally wins the day) and long term prosperity, and the challenge of inspiring new generations to the game, both in its heartlands and hinterland.

Despite all the challenges it faces we should all take great comfort from the fact that cricket is, in my opinion at least, the greatest game in the world and inspires love and devotion like no other. This, a fair wind and a sizeable cheque or two will hopefully this column in ten years time report a global sport in rude health. 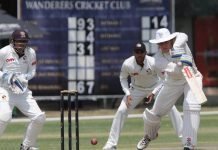