With two more victories on Monday and Tuesday the United Arab Emirates secured an irreversible 3-0 lead in their four-match T20 International series against the Netherlands, underlining their superiority over a young and relatively inexperienced Dutch squad.

As part of coach Ryan Campbell’s long-term strategy the series is serving its purpose, but it will come as a disappointment that on the whole the younger Dutch-produced players have proved unable to grasp the opportunity and turn in more persuasive performances.

To be sure, the margins of victory for the Emiratis have not been overwhelming – Monday’s win in Amstelveen came with only three balls to spare, while that on Tuesday in Voorburg was by just 14 runs – and there have been one or two encouraging signs, but it must be acknowledged that those margins were probably flattering to the home side.

Put in to bat on Monday, the Dutch battled their way to 136 for nine, thanks to a 38-ball knock of 46 from Ben Cooper and 34 off 29 deliveries from Pieter Seelaar.

The Emirati attack again bowled with great discipline, Mohammad Naveed leading from the front with one for 21 from his four overs, the excellent Zahoor Khan taking two for 20, and Rohan Mustafa’s off-breaks yielding three for 27.

Only Cooper, with five fours and a six, was able to hit multiple boundaries, in stark contrast with the ease with which the visitors dispatched the Dutch bowlers when they replied, smacking a total of 14 fours and two sixes across their innings.

Ashfaq Ahmed again got his side off to a flying start, but it was Rameez Shahzad whose 41-ball 49, supported by an almost equally brisk 34 from Mohammad Usman, saw the UAE to a perfectly-paced 5-wicket victory.

The Dutch leg-spinners, debutant Philippe Boissevain and Saqib Zulfiqar, kept the runs down, and Sebastiaan Braat, on his return to the side, made the most of his limited opportunities, but the Dutch were generally unable to put the Emirati batsmen under real pressure.

The same applied in Voorburg on Tuesday, when Seelaar again elected to bowl after winning the toss.

Another half-century by Ashfaq Ahmed underlined his value to the team; this time he made 56 off just 41 deliveries with five fours and two sixes before he became one of three victims for Braat, who bowled well throughout and ended with three for 26.

So did Seelaar, whose first three overs cost only seven runs; his decision to bowl the final over himself trebled that figure, but brought him two wickets as the UAE finished on 152 for eight.

As is the way with T20 matches that total included a series of explosive cameos, from Ghulam Shabbir, Darius D’Silva, Rameez Shahzad and Mohammad Boota, but on an excellent track honours seemed to be about equal as the sides changed over.

That picture soon changed, however, as the Emirati bowlers again quickly took control: the pace of Mohammad Naveed and Qadeer Ahmed, the latter playing for the first time in the series, accounting for Tonny Staal and Saqib Zulfiqar and Mustafa removing Ben Cooper, only Max O’Dowd building an innings of any consequence.

He was supported for a time by Sikander Zulfiqar and by Seelaar, but wickets continued to fall as the asking rate rose, and by the time O’Dowd was run out for 65, made from 54 deliveries with just four boundaries, 25 were still needed off nine balls with only two wickets in hand.

Qadeer had the best figures for the UAE with two for 18, Ahmed Raza not far behind with one for 20, while Mustafa was again the principal wicket-taker with three for 30.

All in all, the Dutch will need to produce something special in Thursday’s final game if they are to avoid a 4-0 clean sweep in the series. 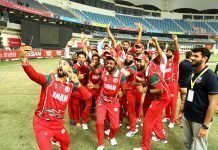 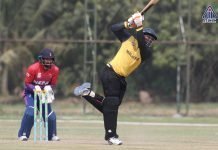