With the ever-expanding international cricket schedule, this season’s edition of Australia’s BBL has seen international players coming and going from their teams at a rapid pace.

In the 2019-20 campaign, five of the eight Big Bash League franchises have had to replace international players, often at the last minute due to injury or international selection, amongst other issues.

In this week’s edition of the Emerging Cricket Podcast, Daniel Beswick and Nick Skinner discussed the potential of introducing an Associate player spot for BBL franchises to utilise throughout a season.

With Nepalese wunderkind Sandeep Lamichhane once again impressing onlookers in his second season of BBL cricket, both Beswick and Skinner believe the time is now to introduce an allotted Associate spot on rosters.

Listen to the conversation from the 36 minutes mark:

“Because the Australian system goes from six state teams to eight (BBL) franchises, the talent is diluted a little bit… I do think there is a real chance for a lot of Associate players to come in and do a job” Beswick said.

Beswick believes it’ll help teams like the Stars immensely due to players like Lamichhane basically not counting as an overseas which would allow them to add two more international players on top of the Nepalese leg spinner.

A plethora of talented Associates took part in the T20 World Cup qualifiers in October of 2019. With fourteen teams battling it out for spots in the 2020 edition of the competition, Ireland, Namibia, Papua New Guinea, Scotland, Oman and the Netherlands sealed qualification from the tournament.

Beswick believes the T20 World Cup is the perfect platform to launch the Associate spot with the talent from the Associate countries on Australian shores battling it out for spots in the Super 12 part of the tournament.

The pair embarked on naming a hypothetical list of Associates who they believed could well and truly influence the competition with Skinner going for players who he believed would stack up amongst the talent in the BBL.

“Assad Vala is someone that really has the skillset… he’s a very good batsman and he can send down some handy off-spinners. Ryan Ten Doeschate as well, his record speaks for itself… the way he can time a chase is exemplary and that’s a valuable skill to have” Skinner said.

When it came to JJ Smit, Skinner heaped the praise on the Namibian who had a big part to play in the Namibian team sealing their ticket to Australia.

“He’s a perennial favourite amongst Associate cricket. He’s an all-rounder who can deliver with bat or ball”. Skinner said.

Beswick agreed, saying Smit would be valuable to any BBL franchise who called upon his services.

“I think he’s capable with ball and bat, and he’s a guy who doesn’t need to take a long time to get himself in… I think he’s a criminally underrated batsman at the level of game he’s playing at. So he’s an automatic for me,” Beswick said.

Beswick continued with the Namibian flavour recommending Bernard Scholtz, with his guile making him valuable when talking about the modern requirements of a T20 spinner.

“I think his left-arm orthodox spin would come in handy to a BBL franchise. I think they’re all obsessed with a bowler who can turn the ball away from the right-hander” Beswick said.

Continuing on with his horses for courses based selections, Beswick also brought Oman opener, Jatinder Singh, into consideration due to his aggressive mindset at the top of the order for Oman.

“I think the Brisbane Heat would love a guy like him cause he just wants to swing from ball one,” Beswick added. 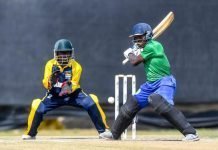 Cricket in Sierra Leone: ‘A blessing in disguise’